JFK on Censorship & the Covert War Against Us

This speech that President Kennedy gave to the American Newspaper Publishers Association in 1961 sums up what we are all about: 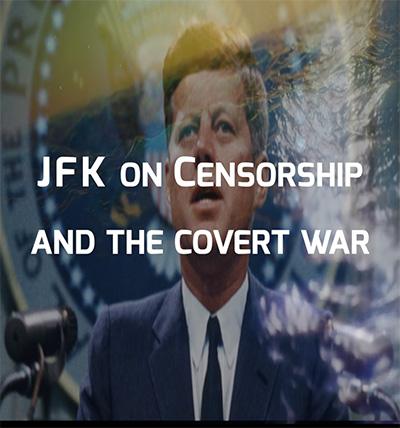 "I refer first to the need for far greater public information….

The very word secrecy is repugnant in a free and open society, and we are as a people, inherently and historically, opposed to secret societies, to secret oaths, and to secret proceedings.

We decided long ago that the dangers of excessive and unwarranted concealment of pertinent facts far outweigh the dangers which are cited to justify it...

And there is very grave danger that an announced need for increased security will be seized upon by those anxious to expand its meaning to the very limits of official censorship and concealment.

That I do not intend to permit to the extent that it’s in my control, and no official of my administration, whether his rank is high or low, civilian or military, should interpret my words here tonight as an excuse to censor the news, to stifle dissent, to cover up our mistakes, or to withhold from the press and the public the facts they deserve to know....

Today, no war has been declared, and however fierce the struggle may be, it may never be declared in the traditional fashion.

Our way of life is under attack. Those who make themselves our enemy are advancing around the globe.

The survival of our friends is in danger, and yet no war has been declared, no borders have been crossed by marching troops, no missiles have been fired….

We are opposed around the world by a monolithic and ruthless conspiracy that relies primarily on covert means for expanding its fear of influence, on infiltration instead of invasion, on subversion instead of elections, on intimidation instead of free choice, on guerrillas by night instead of armies by day.

It is a system which has conscripted vast human and material resources into the building of a tightly knit, highly efficient machine that combines military, diplomatic, intelligence, economic, scientific, and political operations.

It’s preparations are concealed, not published. It’s mistakes are buried, not headlined. It’s dissenters are silenced, not praised.

No expenditure is questioned. No rumor is printed. No secret is revealed….

I have no intention of establishing a new Office of War Information to govern the flow of news. I am not suggesting any new forms of censorship or new types of security classifications.

It is the unprecedented nature of this challenge that also gives rise to your second obligation, an obligation which I share, and that is our obligation to inform and alert the American people; to make certain that they possess all the facts that they need and understand them as well - the perils, the prospects, the purposes of our program, and the choices that we face.

No president should fear public scrutiny of his program. For from that scrutiny comes understanding, and from that understanding comes support, or opposition, and both are necessary.

I am not asking your newspapers to support an administration, but I am asking your help in the tremendous task of informing and alerting the American people, for I have complete confidence in the response and dedication of our citizens, whenever they are fully informed.

I not only could not stifle controversy, among your readers, I welcome it. This administration intends to be candid about its errors, for as a wise man once said, an error doesn’t become a mistake until you refuse to correct it.

We intend to accept full responsibility for our errors, and we expect you to point them out when we miss them.

Without debate, without criticism, no administration and no country can succeed, and no Republic can survive.

That is why the Athenian law maker Solon decreed it a crime for any citizen to shrink from controversy, and that is why our press was protected by the First Amendment.

The only business in America specifically protected by the constitution, not primarily to amuse and entertain, not to emphasize the trivial and the sentimental, not to simply give the public what it wants, but to inform, to arouse, to reflect, to state our dangers and our opportunities, to indicate our crises, and our choices, to lead, mold, educate, and sometimes even anger, public opinion…

And it means finally that government at all levels, must meet its obligation to provide you with the fullest possible information, outside the narrowest limits of national security. And we intend to do it....

And so it is to the printing press, to the recorder of man’s deeds, the keeper of his conscience, the courier of his news, that we look for strength and assistance, confident that with your help, man will be what he was born to be, free and independent."